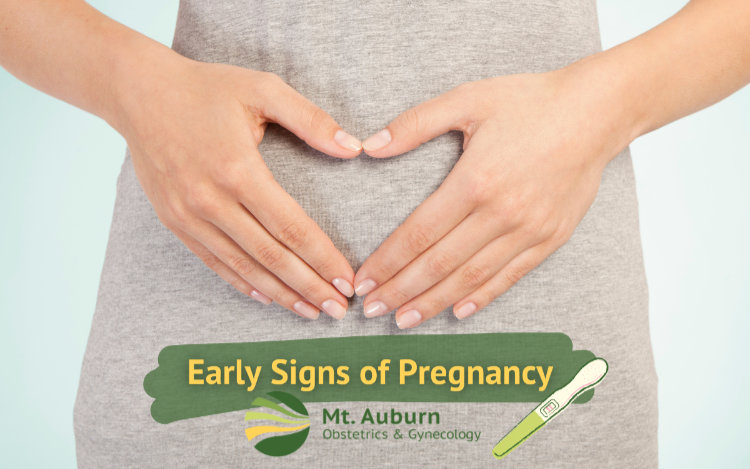 Knowing the early signs of pregnancy will empower you to notice changes in your body that could hint that there’s a baby on the way.

Whether this news excited or frightens you (or both!), everyone with a uterus should be aware of these 16 early signs of pregnancy.

1. Missed Period
Skipping a period is probably the most obvious sign that you could be pregnant. It’s safe to consider your period “missed” if it’s over seven days late—unless you are prone to irregular periods.

However, there’s the tricky issue that pregnancy can cause implantation bleeding. When the fertilized egg attaches to the uterine lining (10-14 days after conception), some light bleeding or spotting may occur. Many people mistake this bleeding for their period.

So, if your period is unusually late or light, it could be an early sign of pregnancy.

2. Tender Breasts
Tender breasts are a common sign of PMS, but they are also a very early sign of pregnancy. In combination with some of the other signs on this list, tender breasts could indicate that you’re pregnant.

3. Dark Areolas
Usually, this change is gradual, but some women experience darkened areolas early on in their pregnancy.

4. Nausea and Vomiting
Morning sickness is a deceptive name for this pregnancy symptom. During pregnancy, many people experience nausea with or without vomiting at any time of the day. This symptom typically occurs 1-2 months after pregnancy, but it can also happen earlier or never.

5. Frequent Peeing
If you notice that you’re urinating more often or in larger quantities, it could be an early sign of pregnancy.

During pregnancy, your body produces more blood. In turn, this causes your kidneys to produce extra fluids, which are expelled through your bladder.

6. Fatigue
Fatigue is a common symptom of so many things—and pregnancy is on that list. Unusual sleepiness or an unexplained loss of energy could be to blame for your body working overtime to prepare for a baby.

7. Mood Swings
Another early sign of pregnancy is extreme emotions. If you find that you’re uncharacteristically emotional, easily overwhelmed, or sad, changing hormones could be to blame. Pregnancy can also create sudden mood changes, and poor sleep could contribute to irritability.

8. Bloating
Hormonal changes cause many early signs of pregnancy, including bloating. Bloating could also signal that your period is on its way or has arrived.

9. Constipation
In combination with other early signs of pregnancy on this list, constipation could be another reason to take a pregnancy test. Constipation is caused by an increase in progesterone, which relaxes your muscles. Relaxes intestines don’t work as hard, causing slow-moving digestion.

10. Heightened Smell
A heightened sense of taste and smell is a common sign of pregnancy. Pregnant people tend to be overly sensitive to smells, and this symptom can occur early on.

11. Food Aversions and Cravings
Similar to smell and taste sensitivity, specific things may repulse or intrigue you if you’re pregnant. Food aversions or cravings could be an early sign of pregnancy if they are different than your usual cravings.

12. Metallic Taste
Increased estrogen levels can cause a metallic taste in your mouth, which is why tasting metal could be another early sign of pregnancy.

13. Congestion
During pregnancy, hormonal changes make the mucous membranes in your nose swell and dry out. This also means they will bleed easily. So congestion and nosebleeds can point to hormonal changes related to pregnancy.

14. Increased Body Temperature
If you’ve noticed these other symptoms and you’ve also been running unusually hot, you could be pregnant. Your Basal Body Temperature (BBT) increases immediately following ovulation, and it can remain elevated after conception instead of lowering as it typically does each cycle.

15. Headaches
Pregnancy (along with a long list of other possibilities) can cause headaches. The reason for your headaches could be increased blood volume and hormonal changes related to pregnancy, but dehydration and allergies are also common culprits.

16. Dizziness
During pregnancy, your blood pressure can dip suddenly and lead to dizzy spells. If your dizziness is extreme or frequent, it’s a good idea to bring it up to your PCP or OBGYN.

Final Thoughts: How to Know When You’re Pregnant
This list of the early signs of pregnancy can be a tool for identifying when it’s time to take an at-home pregnancy test, but there’s no way to know for sure based on these symptoms whether you’re actually pregnant or not.

These early signs of pregnancy are also often symptoms of other illnesses. And you could be pregnant and not experience any of these signs. Everyone’s body is different.

The only way to know for sure if you’re pregnant early on into the pregnancy is to take an at-home pregnancy test.

Many tests can be taken from the first day of your missed period, and some can detect pregnancy even sooner. You may also want to take a follow-up test 21 days after you suspect conception to verify the results.

If the test is positive, make an appointment with your physician as soon as possible to discuss your options. Whether you want family planning tools or resources for unwanted pregnancies, taking action early on can impact your—and your baby’s—long-term health and well-being.

For more information about Women’s Health, or If you’re looking for an OBGYN in the Cincinnati area,
call us at 513-241-4774, or schedule your appointment.