Polycystic ovarian syndrome, also known as PCOS, is the most common hormonal disorder in women of reproductive age. Affecting up to 10% of the population PCOS is one of the leading causes of female infertility and is associated with long-term health risks of heart disease and diabetes. PCOS is often characterized by enlarged ovaries containing multiple, small cysts. Excess androgens (male hormones) and chronic amenorrhea (missed periods) are also common features.

What Are the Symptoms of Polycystic Ovarian Syndrome? 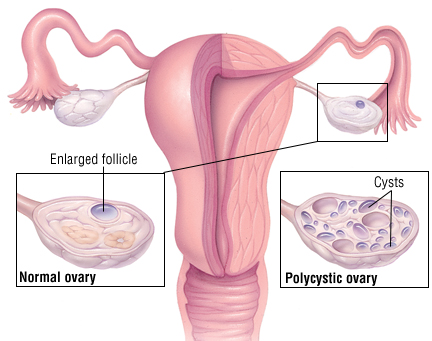 The following are common symptoms of pcos:

The specific symptoms may have varying combinations, depending on the woman’s genetic makeup.

Enlarged ovaries containing many small cysts, which are the result of incomplete ovulation, often accompany PCOS. During the normal ovulatory process, the egg matures in an ovarian follicle which then ruptures and releases the egg. In women with PCOS, high levels of androgens (“male hormones”) stop the egg’s development, leaving an enlarged follicle containing a dead egg. These cysts often look like a string of pearls on ultrasound. Not all women with cysts have PCOS and not all women with PCOS have cysts.

The most visible symptoms of PCOS stem from excessive levels of androgens, such as testosterone. In women, androgens are produced in the ovaries, adrenal glands and fat cells. Androgens are thought of as ?male hormones,? however they are present in both men and women, although men have higher circulating levels of androgens. Androgens include testosterone, DHT (dihydrotestosterone) and estradiol. Excessive androgen levels are responsible for such symptoms as hirsutism and acne in women. In more severe cases, “virilization” may occur, including an enlarge clitoris, balding at the temples, deepening voice and muscle growth.

How Is Polycystic Ovarian Syndrome Diagnosed?

Your doctor will diagnosis PCOS by carefully examining your history of symptoms, as well as physical findings, blood work and ultrasound testing. Blood tests which may be performed to aid in the diagnosis include:

PCOS is a diagnosis of exclusion. Other possible causes of irregular periods or hyperandrogenism must be ruled out.

While the imbalances that cause the symptoms are becoming better understood, the trigger for PCOS is unknown. It is suspected that genetics play a role. One study has shown a possible connection between a gene that helps the body use insulin and PCOS. Other studies have shown that excess insulin production stimulated the production of testosterone and leads to insulin resistance, which is a precursor to Type II diabetes. Insulin also inhibits the production of a hormone that absorbs testosterone.

How Is Polycystic Ovarian Syndrome Treated?

There is no cure for PCOS. The treatment of PCOS is generally symptomatic and centers on life-style modifications and medication.

Hyperinsulinism appears to play a major role in the pathogenesis of PCOS. Elevated insulin levels may increase the luteinizing hormone which in turn stimulates ovarian androgen secretion. Recently the insulin-sensitizing drug metformin (Glucophage) has been found to have beneficial effects on periods and the infertility associated with PCOS.

Although the insulin resistance of PCOS is independent of body mass, the hyperinsulinemia may be aggravated by obesity so weight loss is beneficial in obese women.

To treat irregular or infrequent periods, oral contraceptives may be prescribed to regulate the periods. If the woman is unable to tolerate or is reluctant to take oral contraceptives, she should take progestin periodically to induce a period. Four periods a year are desirable to reduce the risk of over stimulation of the lining of the uterus.

Spironolactone, a diuretic, may be prescribed for symptoms resulting from the over-production of androgens, such as hirsutism, acne and oily skin. Electrolysis or laser procedures can remove unwanted hair permanently.

A steroid such as dexmethasone may be prescribed in very low doses if the primary source of excess androgens seems to be the adrenal glands (as evidenced by high levels of DHEAS).

For infertility Clomid is the first line treatment to stimulate ovulation.

For additional information on PCOS, check out the following resources: