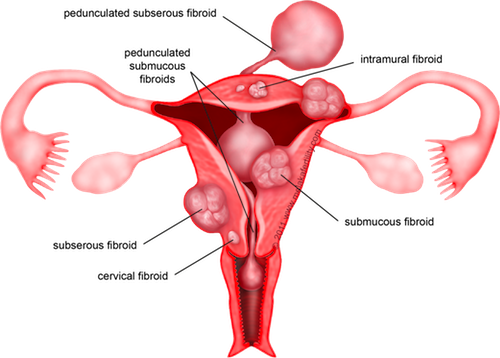 Fibroids are tumors consisting of an overgrowth of muscle and connective tissue. Fibroids may grow into the uterine cavity or may be confined within the uterine wall. Under most circumstances, they are benign. Twenty-five to fifty percent of women have fibroids and the incidence increases with age (20% in their 20’s, 30% in their 30’s, 40% in their 40’s).

What Are the Risk Factors for Fibroids?

Fibroids tend to run in families. If another member of your family has fibroids, you are at an increased risk of getting them. The risk increases if you are overweight for your height, but decreases if you smoke or have had a child.

What causes the initial fibroid to develop is unknown. There may be a genetic component. Researchers are now investigating chromosome abnormalities that may play a part in the production of fibroids. Experts are not clear why some women develop fibroids and others do not.

Fibroid growth seems to be related to estrogen production. Fibroids are slow growing during the reproductive years, but may increase in size with pregnancy. During menopause, fibroid growth usually stops and often fibroids will decrease in size.

What Are the Symptoms of Fibroids?

The two most common symptoms of fibroids are abnormal uterine bleeding and pelvic pressure, however many women with fibroids never have any symptoms at all.

Women with fibroids may have very long and heavy menstrual periods.

There may be pressure in the pelvic region from the enlarged uterine size caused by the fibroids. Symptoms from the pressure are often related to where the fibroid is exerting pressure.

Additionally, there may be urinary frequency, constipation or difficulty with bowel movements.

The presence of fibroids in the uterus can cause a variety of reproductive problems – recurrent miscarriage, infertility, premature labor or complications of labor.

How Are Fibroids Diagnosed?

A pelvic exam by your physician is usually the first step towards diagnosing fibroids. The uterus will feel enlarged or irregular. He or she may describe the uterus as being “12 weeks” or “14 weeks” meaning it is the size of a twelve week pregnancy.

Once your uterus has been identified as being enlarged or irregularly shaped, the presence of fibroids can be seen by ultrasound. An ultrasound can specify the number and size of the tumors. A procedure called a hysteroscopy may be recommended. This procedure allows the physician to see inside the uterine cavity by inserting a small telescope-like instrument (hysteroscope) through the cervix into the uterus.

What Is the Treatment for Fibroids?

One of the first treatments tried for the abnormal uterine bleeding associated with fibroids may be oral contraceptives or progestins.

GnRH agonists (gonadotropin-releasing hormone) have been shown to temporarily shrink fibroids by blocking estrogen production. This class of hormone causes menopausal symptoms, such as hot flashes, vaginal dryness, and bone loss. Using a low dose of estrogen and progesterone, along with the GnRH agonist may extend the length of time the medication can be used.

This procedure can be performed utilizing robotic technology, advanced laproscopic technique, or through an open incision in the abdomen known as laparotomy. You and your doctor will discuss what procedure is best for you. Factors that you will consider include where the fibroids are located and your medical history. Another consideration is whether you plan to have children.

However, a myomectomy does not prevent the growth of new fibroids or the need for future surgery.