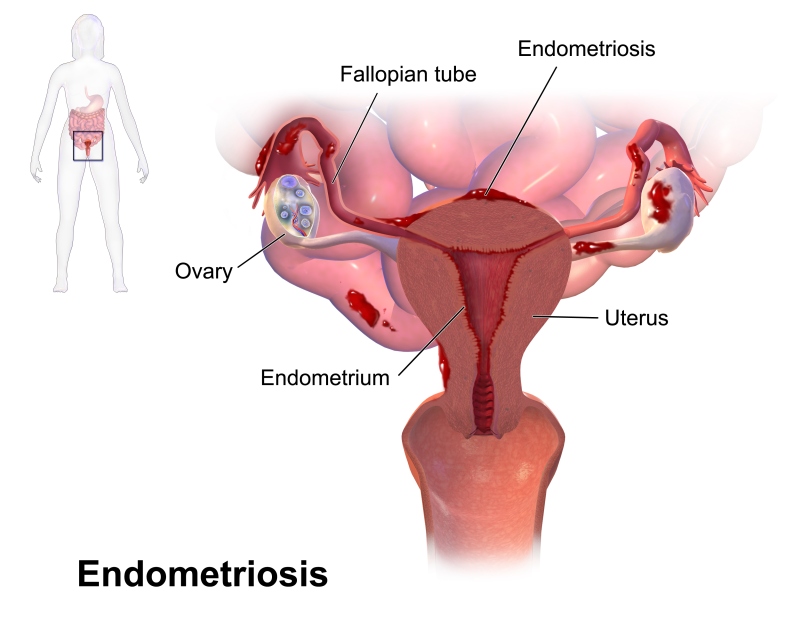 Women with endometriosis have symptoms ranging from mild to severe, although some women have no symptoms at all. Symptoms can include menstrual cramps, pain during sex, low back pain, constipation, pain with bowel movements, and infertility. Some women have chronic pelvic pain. Symptoms are usually at their peak just prior to and with the menstrual period. Symptoms are not indicative of the severity of the endometriosis. A woman with severe pain may have minimal disease, while a woman with severe disease may have no symptoms.

Another idea is that all the tissues where endometriosis is found develop from the same part of the embryo. It is thought that the irritation of wandering menstrual blood causes these tissues to change into functioning endometrial tissue. There is no conclusive evidence, though, that tissues from a common embryonic source can change this way.

Another suggestion is the “immune defect” theory. This theory is based on the high levels of certain antibodies in the blood of endometriosis patients and the fact that women with close relatives with the disease are at greater risk. These women may have an immune reaction against their own tissues. Research into this theory is ongoing.

How Is Endometriosis Diagnosed?
A pelvic exam is the first diagnostic step. Your doctor will examine your cervix and vagina, and will feel for any lumps or tender points on the uterus, fallopian tubes, and ovaries.

If your medical history and pelvic exam suggest endometriosis as a possibility, a laparoscopy will be offered to diagnose endometriosis. This surgical procedure allows the doctor to see the internal pelvic structures directly.

Laparoscopy is a simple, outpatient procedure. A thin, lighted tube is inserted into a small incision in the navel, allowing your physician to view the organs on a television screen. Your physician can note the location, size, and extent of any endometrial implant.

What Is the Treatment for Endometriosis?
Endometriosis is a chronic condition with no real cure. There are many factors to consider when you and your doctor choose a method of treatment. One factor is whether to preserve fertility ; do you want to become pregnant, either now or in the future? Another factor is the severity of your symptoms.

Endometriosis can be treated with medication, surgery, or a combination of both.

What Medications Are Effective for Endometriosis?
Hormones may help slow the growth of the endometrial implants, though they do not reduce adhesions (scar tissue) that cause pain. The most commonly used hormones are birth control pills, progestins, and gonadotropin-releasing hormone (GnRH) agonists.

What Surgeries Are Available for Endometriosis?

There are three surgical options available to treat endometriosis, laparoscopy, laparotomy and hysterectomy.

A laser may be used during a laparoscopy to remove endometriosis and the scar tissue associated with it.

A laparotomy, which involves opening up the abdominal cavity, is sometimes required for more widespread disease that can not be reached through the tiny incision used in the laparoscopy.

The final surgical approach would be a hysterectomy. If the disease is significantly affecting your health and lifestyle and you do not plan on future pregnancies, this option may provide a definitive treatment.